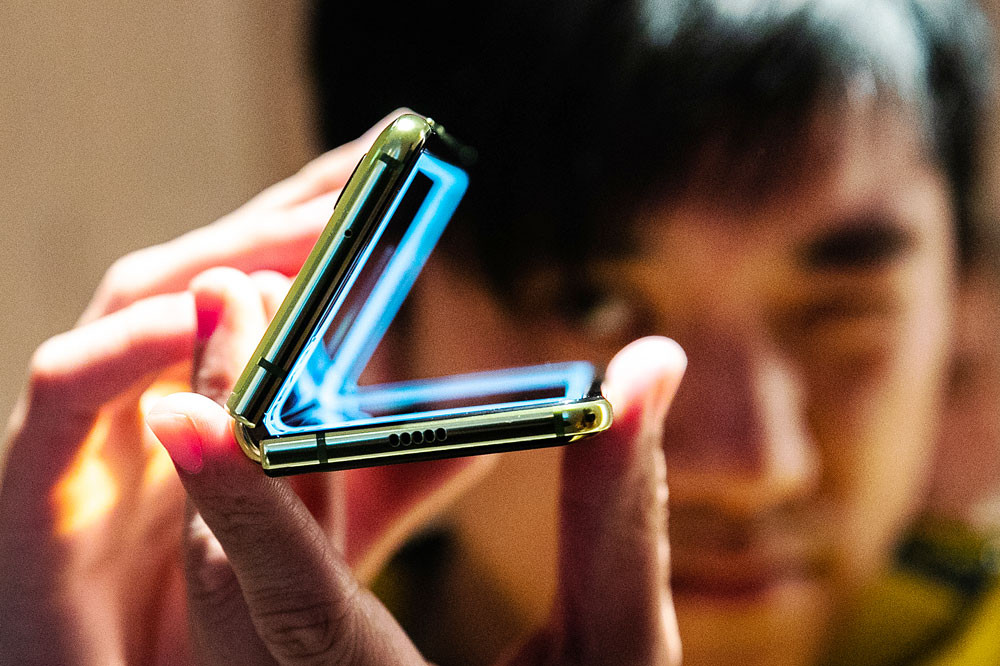 An attendee holds a Samsung Electronics Co. Galaxy Fold mobile device during an unveiling event in New York, United States, on Monday. Samsung launched the phone in February and it goes on sale on April 26 at the wallet-stretching price of US$1,980. (Bloomberg/Jeenah Moon)

Samsung said Monday it was delaying the launch of its folding smartphone after trouble with handsets sent to reviewers.

Some reviewers who got their hands on the Galaxy Fold early reported problems with screens breaking.

Samsung said it decided to put off this week's planned release of the Fold after some reviews "showed us how the device needs further improvements."

The South Korean consumer electronics giant planned to announce a new release date for the Galaxy Fold in the coming weeks.

Initial analysis of reported problems with Galaxy Fold screens showed they could be "associated with impact on the top and bottom exposed areas of the hinge," Samsung said.

There was also an instance where unspecified "substances" were found inside a Galaxy Fold smartphone with a troubled display, according to the company.

"We will take measures to strengthen the display protection," Samsung said.

"We will also enhance the guidance on care and use of the display including the protective layer."

A handful of US-based reporters were given the flagship Galaxy Fold phones, priced at $1,980, ahead of the model's official release, and they reported screen issues within days of using the devices.

The company essentially gave reviewers a "beta product" without enough information, such as not to peel off a protective coating meant to be permanent, according to independent technology analyst Rob Enderle.

"It was all avoidable for a company the size of Samsung," Enderle said.

The failure of a "halo product" meant to showcase innovation and quality could tarnish the brand and send buyers to rivals.

"It can do incredible damage. And Huawei is moving up like a rocket, so this could be good for Huawei."

She wondered if some problems with smartphones reviewed were due to dust, moisture or other material getting into handsets through small openings at the tops and bottoms of hinges.

"If stuff gets in there, it can make its way under the screen," Milanesi said.

"There seems to be a kind of real-life test that maybe didn't occur."

Testing folding phones in a lab is a much different scenario than challenging them "in the wild" where they need to endure pockets, handbags, greasy food, spilled coffee and more, the analyst noted.

Samsung may also need to do more to convey how folding screens warrant more careful handling than stiff displays that have been improved over generations of smartphones.

Milanesi did not expect a slight delay in the launch of the Galaxy Fold to be a major setback for Samsung, saying that the model was unlikely to be a big driver of sales given its price and that services or apps are still being adapted to the new type of smartphone.

Samsung smartphones tuned to work with super-speedy fifth-generation telecommunications networks are more important to the company's bottom line on the near horizon, according to the analyst.

"It is still early days for 5G, but that is the product that is going to make a difference for Samsung this year," Milanesi said.

Samsung is the world's biggest smartphone maker, and earlier this month launched the 5G version of its top-end Galaxy S10 device.

Despite the recent announcements about its new high-end devices, Samsung has warned of a more than 60 percent plunge in first-quarter operating profit in the face of weakening markets.

The firm is also no stranger to device issues.

Its reputation suffered a major blow after a damaging worldwide recall of its Galaxy Note 7 devices over exploding batteries in 2016, which cost the firm billions of dollars and shattered its global brand image.

Samsung originally planned to release the Galaxy Fold as scheduled on April 26.

While Samsung's device was not the first folding handset, the smartphone giant was expected to help spark demand and potentially revive a sector that has been struggling for new innovations.

Other folding devices have been introduced by startup Royole and by Chinese-based Huawei.

Samsung Electronics is the flagship subsidiary of Samsung Group, by far the biggest of the family-controlled conglomerates that dominate business in the world's 11th-largest economy, and it is crucial to South Korea's economic health.

The company has enjoyed record profits in recent years despite a series of setbacks, including the jailing of its de facto chief.