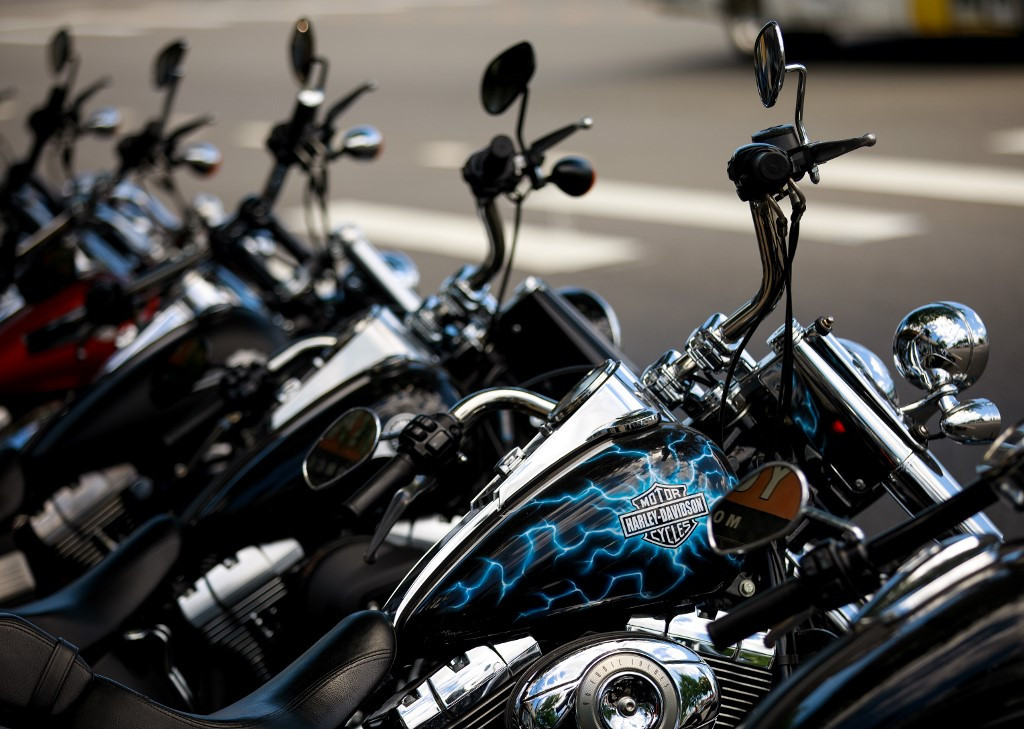 Rows of Harley-Davidson motorcycle sit for sale outside of the Harley-Davidson of New York City showroom store, June 25, 2018 in the Queens borough of New York City. The American motorcycle company announced on Monday that it will shift production of some of its bikes overseas in order to avoid retaliatory tariffs by the European Union in response to U.S. President Donald Trump's tariffs on steel and aluminum imported from the EU. (AFP/Drew Angerer/Getty Images)

US President Donald Trump threatened retribution on Europe Tuesday over tariffs that have bruised profitability at iconic US motorcycle company Harley-Davidson.

Trump  cited commentary from Fox Business News anchor Maria Bartiromo, who pointed to the drag from European Union tariffs as a key factor in falling sales by the iconic US motorcycle maker.

"So unfair to US," Trump said on Twitter. "We will reciprocate."

The commentary was a pivot of sorts from the US president, in targeting Brussels rather than Wisconsin-based Harley.

He previously lashed out at the 116-year-old company after it announced plans last summer to shift some US manufacturing overseas as a way to circumvent the EU tariffs, which were imposed on key American goods in March 2018 in retaliation for Trump's tariffs on steel and aluminum.

Trump's latest threat comes as Washington and Brussels are close to the start of formal trade talks, now that the US leader has moved closer to settling a months-long fight with China.

Harley-Davidson reported a $21 million hit from tariffs in the first quarter, which contributed to the 26.8 percent drop in profits to $127.9 million amid lower revenues.

In June, Harley-Davidson announced it was shifting some manufacturing capacity overseas as "the only sustainable option" following punitive import duties of 31 percent in the EU.

The motorcycle manufacturer in January 2018 announced it would close a Missouri factory and consolidate jobs into Pennsylvania at the same time it was building a new factory in Thailand.

The Thailand operation is part of Harley's "tariff mitigation" strategy aimed at the growing Southeast Asian market, the company said.

Harley also is focused on building up a new generation of riders to make up for declines in the older population that has been its bedrock.

The company said it found 278,000 "new riders" in the US in 2018 and that "this group is the most diverse across age, ethnicity and gender in all the years Harley-Davidson has tracked this data."

Shares of Harley-Davidson fell 2.1 percent to $38.90 in pre-market trading, but was down just 0.35 percent in early trading.