Don't Let Pearl of the Orient Go Dim with Dust

Don't Let Pearl of the Orient Go Dim with Dust 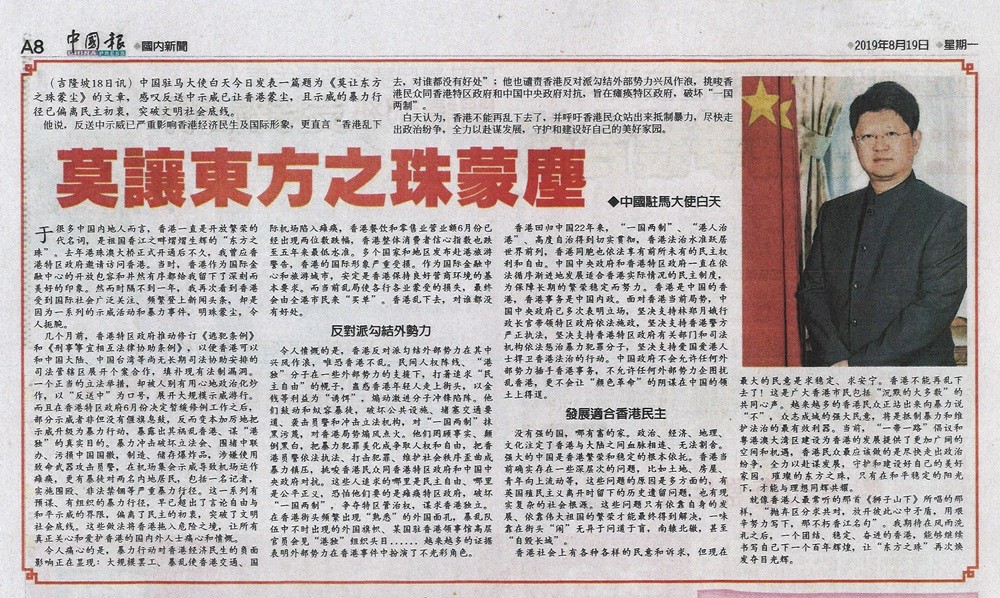 For many mainland Chinese, Hong Kong has been the synonym of openness and prosperity, a shining Pearl of the Orient by the side of Xiang River. Shortly after the opening of Hong Kong-Zhuhai-Macao bridge, I was invited by the S.A.R. government for a brief visit, and was deeply impressed by the openness, inclusiveness, and social order of this international finance hub.

However, nearly a year after my visit, Hong Kong is now attracting global attention and frequently making the headlines because of a series of demonstrations and violent incidents. The Pearl of the Orient is now stained with dust, and I sigh for its light waning.

Months ago, the S.A.R. government had pushed the Fugitive Offenders and Mutual Legal Assistance in Criminal Matters Legislation Amendment Bill, trying to fill a legislative loophole by allowing Hong Kong to cooperate on a case-by-case basis with China mainland, China Taiwan and other jurisdictions with which Hong Kong has no formal extradition treaty.

This necessary and reasonable legislative measure, however, was intentionally politicized by some, and thereafter leads to large-scale demonstrations under the banner of "No Extradition to China". Even after the withdrawal of the above-mentioned Amendment Bill by the S.A.R. government in June, instead of ceasing the demonstration, some protestors went to the length of total violence, laying bare their true intention: destabilizing Hong Kong and pursuing so-called "Hong Kong independence".

Ramming into the Legislative Council, seieging the Liaison Office of the Central People's Government, defacing the Chinese national emblem, making and hoarding explosives, brutally attacking the police with lethal weapons, paralyzing the airport by occupation, even illegally restricting and beating up two mainlanders including a journalist. These organized, intentional violent acts have already far breached the boundary of freedom of speech and demonstration, deviated from the value of democracy, and punched through the bottom line of a civilized society. 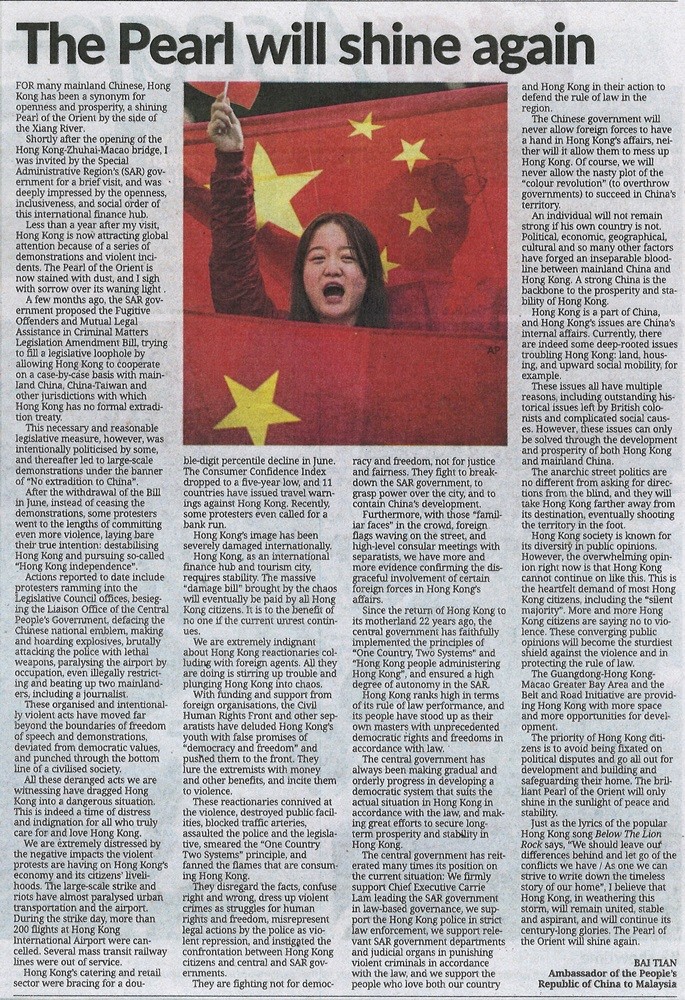 All these deranged acts we are witnessing have dragged Hong Kong into a dangerous situation. This is indeed a time of distress and indignation for all who truly care and love Hong Kong.

We are extremely distressed for the negative impacts of the violent protests on the Hong Kong's economy and its citizens' livelihood. The large-scale strike and riot have almost paralyzed the urban transportation and the airport. During the strike day, more than 200 flights were cancelled in Hong Kong International Airport. Several mass transit railway lines were out of service.

Moreover, Hong Kong's catering and retail sector were bracing for a double-digit percentile decline in June. The Consumer Confident Index also dropped to a 5-year low. 11 countries have issued Hong Kong travel warning. Recently some protestors even called for a bank run. The image of Hong Kong was already severely damaged.

Stability is the requisition of a sound business environment in Hong Kong as an international finance hub and tourism city. The massive "damage bill" brought by the chaos will eventually be paid by all Hong Kong citizens. It is to the benefit of no one, if the current unrest continues.

We are extremely indignant about the Hong Kong reactionaries colluding with foreign masterminds. All they are doing is stirring up the trouble, plunging Hong Kong into chaos. With the funding and support from foreign organizations, the Civil Human Rights Front and other separatists deluded the Hong Kong youth with false promises of "democracy and freedom" and pushed them to the front. They lured the extremists with money and other benefits, and incite them to violence.

These reactionaries connived at the violence, destroyed public facilities, blocked traffic arteries, assaulted the police and the legislative, smeared the "One Country Two systems", and fanned the flames that consumed Hong Kong. They disregarded the facts, confused right and wrong, prettified the violent crimes as struggles for human rights and freedoms, misrepresented polices' legal actions as violent repression, and they instigated the confrontation between Hong Kong citizens and central and S.A.R. government.

They are fighting not for democracy and freedom, not for justice and fairness. They fight to breakdown the S.A.R. government, to grasp power over the city, and to contain China's development. Furthermore, with those "familiar faces" in the crowd, foreign flags waving on the street, and high-level consular official meeting with separatists… we have more and more evidences to confirm the disgraceful involvement of certain foreign forces in Hong Kong.

Since the return of Hong Kong to its motherland 22 years ago, the central government has faithfully implemented the principles of "One Country, Two Systems" and "Hong Kong people administering Hong Kong", and ensured a high degree of autonomy in the S.A.R. Hong Kong ranks high in terms of its rule of law performance, and its people have stood up as their own masters with unprecedented democratic rights and freedoms in accordance with law.

The central government has always been making gradual and orderly progress in developing a democratic system that suits the actual situation in Hong Kong in accordance to the law, and making great efforts to secure the long-term prosperity and stability in Hong Kong.

The central government has reiterated many times its position on the current situation. We firmly support Chief Executive Carrie Lam leading the S.A.R. government in the law-based governance, supports the Hong Kong police in their strict law enforcement, supports relevant departments of the S.A.R. government and judicial organs in punishing the violent criminals in accordance with the law, and supports the people who love both our country and Hong Kong in their action to defend the rule of law in the region. The Chinese government will never allow any foreign forces to have a hand in Hong Kong affairs, neither will it allow them to mess up Hong Kong. Of course, we will never allow the nasty plot of "color revolution" to succeed on China territory.

An individual will not remain strong if his own country is not. Political, economic, geographical, cultural and so many other factors have forged the inseparable bloodline between China mainland and Hong Kong. A strong China is the adamant backing of the prosperity and stability of Hong Kong.

Hong Kong is a part of China, and Hong Kong issue is China's internal affair. Currently, there are indeed some deep-rooted issues troubling Hong Kong: land, housing, upward social mobility, for example. These issues all have multiple reasons, including outstanding historical issues left by British colonists and complicated social causes. However, these issues can only be solved through development and prosperity of both Hong Kong and China mainland. The anarchic street politics are no different from asking the direction from the blind, and they will bring Hong Kong farther from its destination, eventually shooting Hong Kong in the foot. 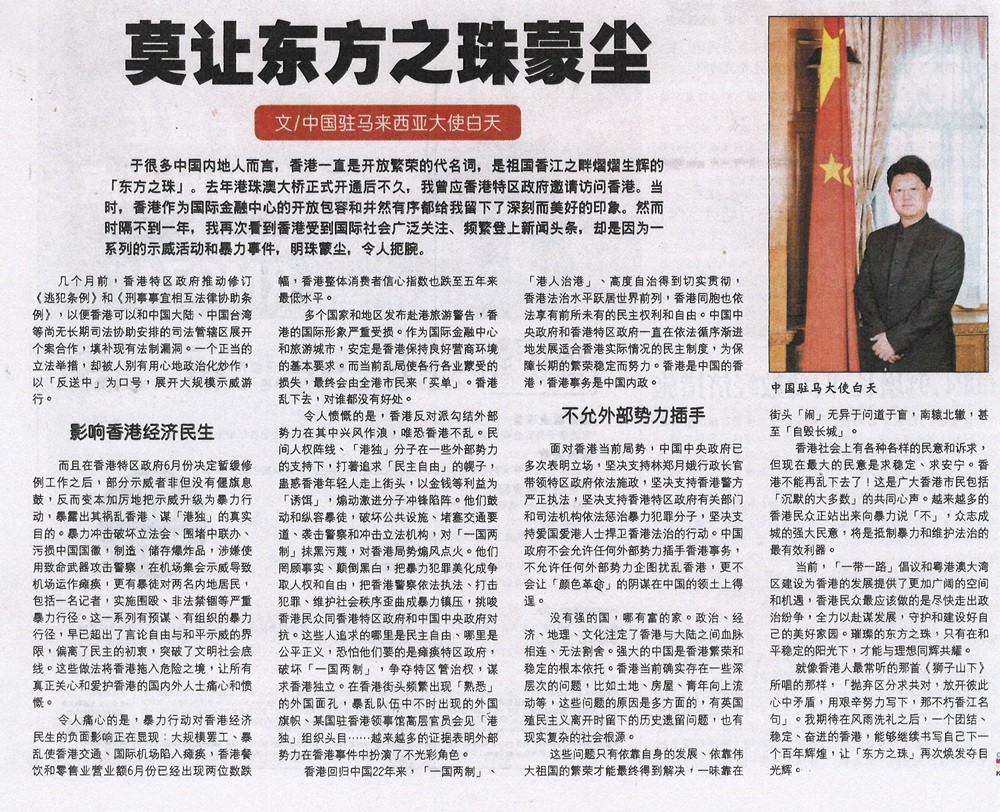 The Hong Kong society is known for its diversity in public opinions. However, the overwhelming opinion right now is that Hong Kong shall not continue to fall like this. This is the heartfelt demand of most Hong Kong citizens, including the "silent majority". More and more Hong Kong citizens have stepped up and said no to violence. These converging public opinions will become the sturdiest shield against the violence and protecting the rule of law.

The Guangdong-Hong Kong-Macao Greater Bay Area and the Belt and Road Initiative are providing Hong Kong with broader space and more opportunities of development. The priority of Hong Kong citizens is to avoid being fixed on the political disputes and go all out for development, building and safeguarding their home. The brilliant Pearl of the Orient will only shine in the sunlight of peace and stability.

Just like the lyrics of the popular song in Hong Kong, Below the Lion Rock, "We should leave our differences behind and let go of the conflicts we have. As one we can strive to write down the timeless story of our home". I believe that Hong Kong, weathering the storm, will remain united, stable and aspirant, and will continue its century-long glories. The Pearl of the Orient will shine again.